TUCSON, Ariz., Jan. 10, 2017 /PRNewswire/ -- The U.S. Department of Defense has approved the release of Raytheon Company's (NYSE: RTN) Standard Missile-6 to several international customers. Many of the approved countries are seeking the multi-mission SM-6 to bolster their shipbuilding programs. 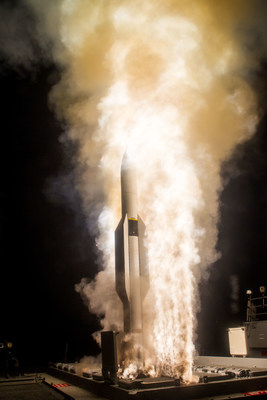 SM-6 currently provides U.S. Navy vessels with extended-range protection against fixed- and rotary-wing aircraft, unmanned aerial vehicles, cruise missiles and ballistic missiles in the terminal phase of flight. Earlier this year the missile was also successfully tested as an offensive effector against targets on the ocean's surface.

"International navies are seeking the level of sophisticated protection that SM-6 provides," said Mike Campisi, Standard Missile-6 senior program director. "The flexibility of this multi-mission effector drives significant savings for our partners and allies; it's the exact opposite of a boutique missile."

SM-6 continues to go further and faster. It shattered the record for the longest range surface-to-air intercept in September of this year – a milestone it set, and broke, twice before.