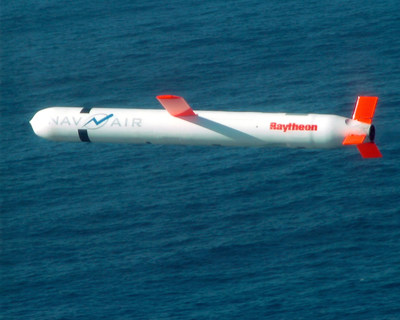 "Tomahawk's tactics and procedures have evolved to support the new missions that are being assigned to the weapon," said Dave Adams, senior program director for Tomahawk at Raytheon Missile Systems. "Tomahawk continues to serve and rapidly deliver urgently needed capabilities to the Fleet."

The first test was planned in real time by the crew of the USS Pinckney, who used the Launch Platform Mission Planning (LPMP) capability of the Tactical Tomahawk Weapons Control System, based on data provided by the United States Fleet Forces Command in Norfolk, Virginia. The Tomahawk missile followed a pre-planned route until the conclusion of the test.

In the second test, mission planners again used the dynamic LPMP capability to generate a longer-duration mission that also concluded with a terminal dive maneuver against the target. This test also validated missile performance for a long-duration mission.  Tomahawk has a range of 1,000 statute miles and can defeat heavily defended targets virtually anywhere on Earth.

About Tomahawk
The U.S. Navy has conducted more than 75 successful Tomahawk flight tests since 2006. The cruise missile has been employed in combat more than 2,000 times since it was introduced. Tomahawk is the key weapon used by U.S. and British forces to defeat integrated air defense systems and strike high–value, fixed and mobile targets in support of national policy.