PELHAM, N.H., May 23, 2017 /PRNewswire/ -- Raytheon Company's (NYSE: RTN) newest integrated air and missile defense radar has been busy since its debut at the 2016 Winter AUSA tradeshow. The gallium nitride-powered Active Electronically Scanned Array proposed upgrade to the Patriot™ Air and Missile Defense has surpassed more than 1,000 hours of operation in just over a year, which is half the time of a typical testing program. 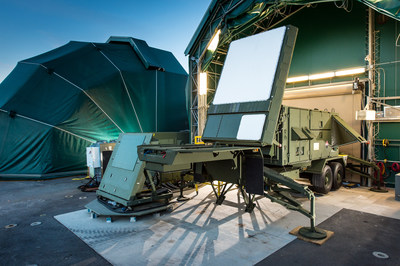 "We achieved this milestone so quickly because of our successful experience developing and maturing GaN for programs like the U.S. Navy's Air and Missile Defense Radar," said Doug Burgess, director of AESA programs at Raytheon's Integrated Defense Systems business. "We're ready to take the next step and get this radar into the hands of our customers."

During the course of the 1,000 hours, Raytheon's GaN-based AESA prototype radar routinely demonstrated 360-degree capability by working together with a second GaN-based AESA antenna that was pointed in a different direction.  As targets flew out of one array's field of view and into another, the two arrays seamlessly passed information back and forth, tracking the target continuously.  The main array also detected and tracked tactically maneuvering fighter jets and thousands of other aircraft.

"Raytheon's GaN technology is backed by 19 years of research and $300 million in investment, while our competitors are either new to the market or primarily build GaN for commercial applications," said Ralph Acaba vice president of Integrated Air and Missile Defense at Raytheon's Integrated Defense Systems business. "When national security is on the line you want highly reliable, proven technology that is certified by the U.S. Department of Defense for use in military radars."

Raytheon's GaN-based AESA radar will work with the Integrated Air and Missile Defense Battle Command System and other open architectures. It maintains compatibility with the current Patriot Engagement Control Station and full interoperability with NATO systems.

Raytheon Company, with 2016 sales of $24 billion and 63,000 employees, is a technology and innovation leader specializing in defense, civil government and cybersecurity solutions. With a history of innovation spanning 95 years, Raytheon provides state-of-the-art electronics, mission systems integration, C5I™ products and services, sensing, effects, and mission support for customers in more than 80 countries. Raytheon is headquartered in Waltham, Massachusetts. Follow us on Twitter @Raytheon.

This document does not contain technology or technical data controlled under either the U.S. International Traffic in Arms Regulations or the U.S. Export Administration.