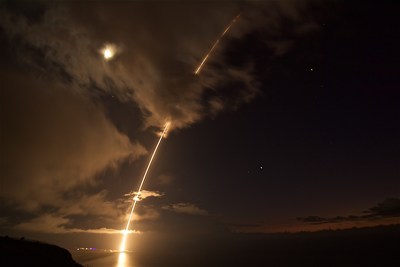 "Earlier this year, our customer requested an enhanced capability to deal with a sophisticated medium-range ballistic missile threat," said Mike Campisi, Raytheon's SM-6 senior program director. "We did all this – the analysis, coding and testing – in seven months; a process that normally takes one to two years."

This was the third time that the SM-6 missile successfully engaged a ballistic missile target in its terminal phase. It was first tested in a successful flight test mission in August 2015, and then again in late 2016.

Deployed on U.S. Navy ships, SM-6 delivers a proven over-the-horizon offensive and defensive capability by leveraging the time-tested Standard Missile airframe and propulsion system. It's the only missile that supports anti-air warfare, anti-surface warfare and sea-based terminal ballistic missile defense in one solution—and it's enabling the U.S. and its allies to cost-effectively increase the offensive might of surface forces. Raytheon has delivered more than 330 SM-6 missiles with continuing production.

The U.S. Department of Defense has approved the sale of SM-6 to several allied nations.

About Raytheon
Raytheon Company, with 2016 sales of $24 billion and 63,000 employees, is a technology and innovation leader specializing in defense, civil government and cybersecurity solutions. With a history of innovation spanning 95 years, Raytheon provides state-of-the-art electronics, mission systems integration, C5I™ products and services, sensing, effects, and mission support for customers in more than 80 countries. Raytheon is headquartered in Waltham, Massachusetts. Follow us on Twitter. www.raytheon.com