WASHINGTON, Oct. 9, 2017 /PRNewswire/ -- Raytheon Company (NYSE: RTN) has awarded seven $10,000 scholarships to student veterans working toward degrees in disciplines such as electrical engineering, education and computer science who demonstrated leadership on campus and in their local communities. 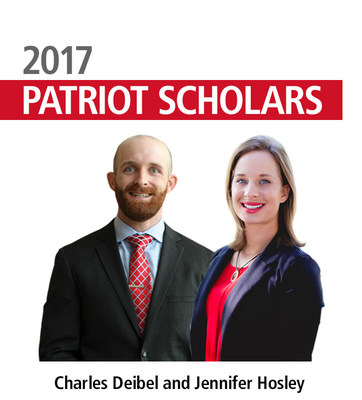 Raytheon, in partnership with Student Veterans of America, offers two scholarship opportunities designed to help student veterans achieve educational goals that will lead to success in their civilian lives. The Raytheon-SVA scholarship is open to all U.S. military veterans who want to further their education in engineering and related technology fields after returning to civilian life. The Patriot Scholarship, named after the Patriot Air and Missile Defense System, is offered annually to two U.S. Army veterans pursuing an undergraduate or graduate degree at an accredited university. Both scholarships require applicants to demonstrate leadership and commitment to their communities.

The 2017 Raytheon-SVA scholarship recipients are:

The 2017 Raytheon Patriot Scholarship recipients are:

"We want to help position student veterans for future success as they make the transition from active military service to civilian life," said Tom Laliberty, vice president of Integrated Air and Missile Defense for Raytheon Integrated Defense Systems. "These scholarships will support them as they attain their personal goals and pursue successful and rewarding careers."

About Student Veterans of America
SVA is the country's premier organization for student veterans. SVA supports all veterans through their transition from the military, educational advancement, and career growth. SVA represents a network of nearly 1,500 chapters on campuses in all 50 states and four countries representing over 600,000 student veterans at those colleges and universities. For more information, visit us at www.studentveterans.org.