FARNBOROUGH, England, July 16, 2018 /PRNewswire/ -- Early in 2018, U.S. Marine Corps F-35B Lightning II fighters deployed to the Pacific aboard the USS Wasp amphibious assault ship, and used Raytheon Company's (NYSE: RTN) Intelligence, Information and Services business's Joint Precision Approach and Landing System (JPALS) to guide them onto the ship's deck in all weather and surface conditions up to the rough waters of Sea State 5. 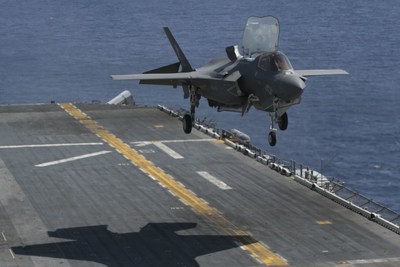 The system allows precise landings through GPS receivers and an encrypted, jam-proof datalink.

"We're asking our pilots to land in some of the most difficult conditions on Earth," said U.S. Navy Captain B. Joseph Hornbuckle III, program manager, Naval Air Traffic Management Systems Program Office. "JPALS goes a long way toward ensuring the safety of our aircrews and the success of our missions."

JPAL's precision navigation is equally effective ashore. A land-based version of the system can be small enough to be either dropped into an austere environment via parachute or driven in on a trailer.

"Deploying with the F-35 is a good start, but it's just the beginning," said Matt Gilligan, Raytheon vice president of Navigation, Weather and Services. "There are many fixed and rotary wing aircraft around the world and across the services that deploy to harsh, low-visibility environments where JPALS would be extremely valuable."

The system is slated to go into production in 2019. To learn more about JPALS, visit us here.