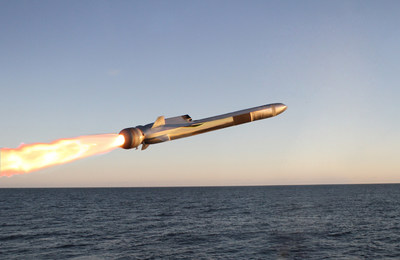 "Raytheon delivered strong bookings, sales growth, EPS and cash generation in the second quarter," said Thomas A. Kennedy, Raytheon Chairman and CEO. "The strength of our bookings and record backlog demonstrate the company is well positioned for future growth."

The company has updated its financial outlook for 2018 for operating performance, pension, tax-related and other items. In addition to the impact of the discretionary pension plan contribution discussed above, some of the company's pension plans purchased a group annuity contract on July 17, 2018 to transfer $923 million of outstanding pension benefit obligations related to certain U.S. retirees and beneficiaries of the company's previously discontinued operations. In connection with this transaction, the company will recognize an unfavorable non-cash, non-operating pension settlement charge of $288 million pretax, $228 million after tax, in the third quarter 2018 primarily related to the accelerated recognition of actuarial losses in those plans. This will have an estimated unfavorable EPS impact of $0.79 in the third quarter and full-year 2018, and was not included in the prior guidance.

The company also decreased its effective tax rate to reflect the discretionary pension plan contribution and the pension plan annuity transaction discussed above, as well as other tax improvements.

Intelligence, Information and Services (IIS) had second quarter 2018 net sales of $1,687 million, up 8 percent compared to $1,555 million in the second quarter 2017. The increase in net sales for the quarter was primarily driven by higher net sales on classified programs, the Development, Operations and Maintenance (DOMino) cyber program, and the Air and Space Operations Center Weapon System (AOC WS) program.

During the quarter, IIS booked $802 million on a number of classified contracts. IIS also booked $298 million on domestic and foreign training programs in support of Warfighter FOCUS activities.

During the quarter, SAS booked $1,121 million on a number of classified contracts.

During the quarter, Forcepoint had bookings of $148 million compared to $115 million in the second quarter 2017, an increase of 29 percent.

Conference Call on the Second Quarter 2018 Financial Results
Raytheon's financial results conference call will be held on Thursday, July 26, 2018 at 9 a.m. ET. Participants will include Thomas A. Kennedy, Chairman and CEO; Anthony F. O'Brien, vice president and CFO; and other company executives.

The dial-in number for the conference call will be (866) 270-6057 in the U.S. or (617) 213-8891 outside of the U.S. The conference call will also be audiocast on the Internet at www.raytheon.com/ir. Individuals may listen to the call and download charts that will be used during the call. These charts will be available for printing prior to the call.

Interested parties are encouraged to check the website ahead of time to ensure their computers are configured for the audio stream. Instructions for obtaining the free required downloadable software are posted on the site.

Disclosure Regarding Forward-looking Statements
This release and the attachments contain forward-looking statements, including information regarding the company's financial outlook, future plans, objectives, business prospects and anticipated financial performance. These forward-looking statements are not statements of historical facts and represent only the company's current expectations regarding such matters. These statements inherently involve a wide range of known and unknown risks and uncertainties. The company's actual actions and results could differ materially from what is expressed or implied by these statements. Specific factors that could cause such a difference include, but are not limited to: the company's dependence on the U.S. government for a significant portion of its business and the risks associated with U.S. government sales, including changes or shifts in defense spending due to budgetary constraints, spending cuts resulting from sequestration, a government shutdown, or otherwise, uncertain funding of programs, potential termination of contracts and performance under undefinitized contract awards; difficulties in contract performance; the resolution of program terminations; the ability to procure new contracts; the risks of conducting business in foreign countries; the unpredictability of timing of international bookings; the ability to comply with extensive governmental regulation, including export and import requirements such as the International Traffic in Arms Regulations and the Export Administration Regulations, anti-bribery and anti-corruption requirements including the Foreign Corrupt Practices Act, industrial cooperation agreement obligations, and procurement and other regulations; the ability to obtain timely U.S. government approvals for international contracts; changes in government procurement practices; the impact of competition; the ability to develop products and technologies, and the impact of associated investments and costs; the ability to recruit and retain qualified personnel; the impact of potential security and cyber threats, and other disruptions; the risk that actual pension returns, discount rates or other actuarial assumptions, including the long-term return on asset assumption, are significantly different than the company's current assumptions; the risk of cost overruns, particularly for the company's fixed-price contracts; dependence on component availability, subcontractor and partner performance and key suppliers; risks of a negative government audit; risks associated with acquisitions, investments, dispositions, joint ventures and other business arrangements; the ability to grow in the government and commercial cybersecurity markets; risks of an impairment of goodwill or other intangible assets; the impact of financial markets and global economic conditions; the use of accounting estimates in the company's financial statements, including with respect to the provisional impact of the Tax Cuts and Jobs Act of 2017; the outcome of contingencies and litigation matters, including government investigations; the risk of environmental liabilities; and other factors as may be detailed from time to time in the company's public announcements and Securities and Exchange Commission filings. The company undertakes no obligation to make any revisions to the forward-looking statements contained in this release and the attachments or to update them to reflect events or circumstances occurring after the date of this release, including any acquisitions, dispositions or other business arrangements that may be announced or closed after such date.