TEWKSBURY, Mass., March 19, 2019 /PRNewswire/ -- Raytheon Company's Enterprise Air Surveillance Radar just took a 12-hour trip down the Eastern Seaboard. EASR, the newest sensor in the U.S. Navy's SPY-6 family of radars, recently completed subsystem testing at Raytheon's Near Field Range in Sudbury, Massachusetts. The 6' x 6' rotating array was wrapped, loaded onto a flatbed truck and eventually crane-lifted onto a 100 foot test tower at the Surface Combat Systems Center at Wallops Island, Virginia. Once up and running, the radar will undergo system-level testing, tracking a variety of aircraft through the end of 2019. 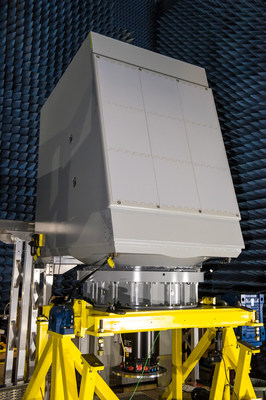 "Going from 'cold steel' to a fully calibrated radar in less than one year is no small feat, but that's exactly what we accomplished with EASR," said U.S. Navy Captain Jason Hall, Program Manager for Above Water Sensors, Program Executive Office Integrated Warfare Systems. "The scalable building block architecture developed for AN/SPY-6(V)1 enabled EASR to rapidly complete subsystem testing. We are making great strides toward delivering SPY-6 capability across the fleet."

Both versions of EASR are built on scalable Radar Modular Assembly technology as well as a software baseline that has been matured through development and recent test successes of AN/SPY-6(V)1 the U.S. Navy's program of record for the DDG 51 Flight III destroyers. Each RMA is a self-contained radar in a 2' x 2' x 2' box. These individual radars can integrate together to form arrays of various sizes to address any mission on any ship. EASR also adds air traffic control and weather capabilities to the mature SPY-6 software baseline.

Upon completion of system-level testing in Q4 2019, EASR will shift from the engineering and manufacturing development phase to the production phase. The 1st delivery of AN/SPY-6(V)2 to LHA-8, the America Class Amphibious Assault Ship, is on plan for 2021.