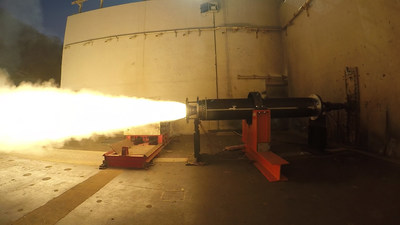 The company is offering the DeepStrike missile for the U.S. Army's Precision Strike Missile, or PrSM, program to replace the aging Army Tactical Missile System that is approaching the end of its service life.

"Testing shows us how initial data assessments line up and validates them for the next phase in development," said Dr. Thomas Bussing, Raytheon Advanced Missile Systems vice president. "This test confirms our design for the DeepStrike propulsion system is solid and moves us one step closer to extending the Army's reach and doubling the load-out of long-range fires."

The rocket motor test at Allegany Ballistics Laboratory in West Virginia is the latest in a series of milestones for the DeepStrike missile. Raytheon recently concluded a successful preliminary design review for the weapon.

Raytheon's new, long-range precision strike missile features an innovative, two-in-the-pod design and will fly farther, faster, and give the Army twice the firepower at half the cost per missile. It is also more maneuverable and has a modular, open architecture to simplify system upgrades.

"With our expertise in advanced weapon systems, Raytheon is best positioned to provide an affordable, low-risk solution that gives the Army an overwhelming advantage over our nation's adversaries," Bussing said.

The DeepStrike missile will defeat fixed land targets 60-499 kilometers away, and get there faster than current systems.