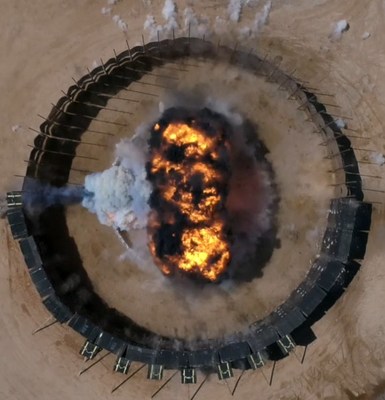 The DeepStrike missile is Raytheon's offering for the U.S. Army's Precision Strike Missile, or PrSM, program. PrSM will replace the Army Tactical Missile System, which was designed in the 1970s and is rapidly approaching the end of its service life. During the arena test, experts at the National Technical Systems testing facility detonated the warhead inside a controlled environment and determined it exceeds Army performance requirements based on the mass and distribution of fragments.

"This test, on the heels of our successful preliminary design review for DeepStrike, shows how quickly we are moving to deliver this much-needed capability to ground troops," said Dr. Thomas Bussing, Raytheon Advanced Missile Systems vice president. "With our advanced technology and expertise in missile design and development, Raytheon is uniquely positioned to provide the Army with the best possible, long-range surface-to-surface missile."

Featuring an innovative, two-in-the-pod design and other advancements, Raytheon's new, long-range precision strike missile will fly farther, faster, cover more range and double the firepower at half the cost. It's also more maneuverable and has a modular, open architecture that simplifies system upgrades.

Raytheon's DeepStrike missile will defeat fixed land targets 60-499 kilometers away, improve responsiveness compared to current systems and restore the Army's capability to overmatch an adversary on the battlefield.