PARIS, June 17, 2019 /PRNewswire/ -- Raytheon (NYSE: RTN) won a four-year $234 million initial low-rate production contract from the U.S. Navy to outfit all of its nuclear-powered aircraft carriers and amphibious assault ships with 23 Joint Precision Approach and Landing Systems. JPALS is a GPS-based precision landing system that guides aircraft to precision landings in all weather and surface conditions. 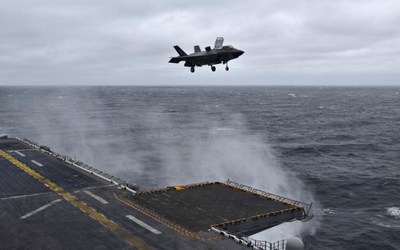 "The U.S. Navy understands how JPALS contributes to their mission success and safety of its people," said Matt Gilligan, vice president of Raytheon's Intelligence, Information and Services business. "Other military services could also benefit from the system's ability to safely land both fixed and rotary-wing aircraft in almost any low-visibility environment."

Earlier this year, F-35B pilots participated in two demonstrations of a new expeditionary version of the JPALS system that brings the same precision capability from sea to shore. The proof-of-concept events showed how the GPS-based system could be reconfigured into a mobile version to support landings in a traditional airport setting.

Expeditionary JPALS fits in five transit cases and could be repackaged for a variety of small transit vehicles transportable by C-130. Once on the ground, the system can be fully operational in under 90 minutes.

To learn more about JPALS visit us here.