PARIS, June 19, 2019 /PRNewswire/ -- Raytheon Company (NYSE: RTN) launched an AIM-9X® Sidewinder Block II missile for the first time from a National Advanced Surface-to-Air Missile System, and engaged and destroyed a target during a May 2019 flight test supported by the Royal Norwegian Air Force at the Andoya Test Center in Norway. 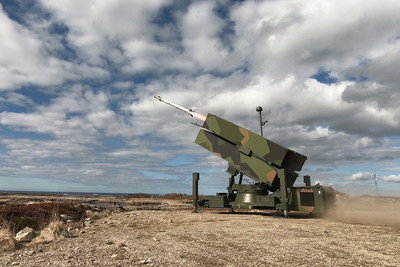 The AIM-9X Sidewinder is a:

"This flight test opened the door for NASAMS customers to add a vital, short-range layer to their ground-based air defense," said Kim Ernzen, vice president of Raytheon Air Warfare Systems. "Pairing Sidewinder with AMRAAM means forces can have complementary interceptors with a mix of sensors to better engage and destroy threats that may attempt to overwhelm a defense system."

Jointly produced by Raytheon and KONGSBERG, NASAMS has been integrated into the U.S. National Capital Region's air defense system since 2005. Seven countries have fielded NASAMS and two others are on contract for delivery.

"The NASAMS path of evolution continues by demonstrating yet another capability from the Raytheon family of missiles in the system, giving customers a true missile mix with AMRAAM, AMRAAM-ER and AIM-9X," said Kjetil Myhra, executive vice president of Kongsberg Defence & Aerospace AS.

About KONGSBERG
KONGSBERG (OSE-ticker: KOG) is an international, knowledge-based group delivering high-technology systems and solutions to clients within the oil and gas industry, merchant marine, defence and aerospace. KONGSBERG has close to 11,000 employees located in 40 countries. Follow us on Twitter: @kongsbergasa.