WASHINGTON, Jan. 15, 2020 /PRNewswire/ -- Raytheon Company (NYSE: RTN) delivered its 10th AN/AQS-20C minehunting sonar system to the U.S. Navy. The sonar-towed body was officially transferred to the Naval Surface Warfare Center, Panama City Division. The system – which is the program of record for the Navy's Littoral Combat Ship mine countermeasure mission package – is now fully qualified and will move toward initial operating capability. 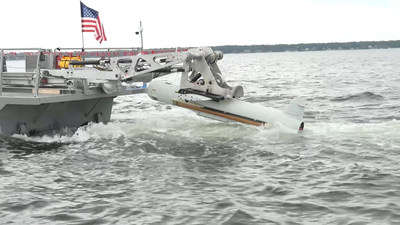 The AQS-20C system is platform agnostic and can be integrated onto various tow vehicles. It is a key element in single sortie detect-to-engage capability, which combines the search-detect-identify and neutralize elements of an MCM mission on a single platform. The program completed developmental testing in February 2019, and will undergo further integration on the MCM Unmanned Surface Vehicle in early 2020 and ultimately aboard the LCS.

Raytheon Company, with 2018 sales of $27 billion and 67,000 employees, is a technology and innovation leader specializing in defense, civil government and cybersecurity solutions. With a history of innovation spanning 97 years, Raytheon provides state-of-the-art electronics, mission systems integration, C5I® products and services, sensing, effects and mission support for customers in more than 80 countries. Raytheon is headquartered in Waltham, Massachusetts. Follow us on Twitter.